Kim Dürbeck, electronic music producer, crate digger extraordinaire and one half of the duo Superkind that was founded in Japan in 2016 with partner Rulefinn (NO). His love for timeless disco productions, techno and 12" singles lays the fundation for a broad spectre of curiosities in Dürbeck’s DJ sets. Kim was also known as Kimichi. Dürbeck has a strong timeline as one of the most dedicated Dj’s from Norway’s music capital Oslo, supporting international artists such as Glenn Underground (US), Ben Klock (DE), Boo Williams (US), Black DevilDisco Club (FR), Onra (FR), Ashley Beedle (UK), Anhony Naples (US), Robert Del Naja Massive Attack (UK) and Giorgio Moroder (IT). Kim has strong roots in electronical music and a big passion for disco, soul and jazz on wax. Kim is currently a resident dj at Ingensteds in Oslo. Kim Dürbeck is signed to Dugnadrec.

Gabriel Patås is a norwegian guitarist, producer, and DJ creating music in the techno/ambient field. After years as a classical guitarist, he now weaves his craftsmanship of the guitar into his current compositions and live appearances. In his DJ-sets and compositions, his intention is to summarise his immediate surroundings at the present time by sampling fellow improv musicians, using field recordings, and working together with contemporary artists of music, poetry, and visual arts.

Although mainly being present in the club scene, he has also composed music for video games, animated short films, and theatre shows.
soundcloud.com/gabrielpataas 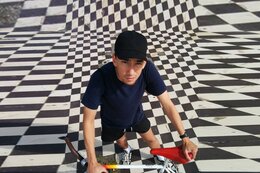